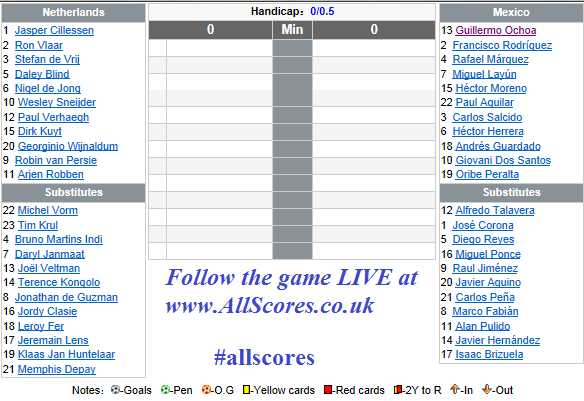 TEAM NEWS
Netherlands coach Louis van Gaal welcomes back captain Robin van Persie from suspension.
Bruno Martins Indi is only fit enough to return to the bench after concussion so Dirk Kuyt continues at left back.
Mexico coach Miguel Herrera is without Jose Vasquez, who serves a one-match ban, so Carlos Salcido will deputise as the holding midfielder.
Aside from that, they are expected to be unchanged from the side that beat Croatia.
Mexico coach Miguel Herrera: "We have a great atmosphere and a great attitude going into this game, and that is key. But we also have to play very well because we are facing a very difficult opponent.
"Do we believe this could be Mexico's World Cup? Yes, more than ever. We are very convinced that this time will be different for us, and we are ready to make history.
"I can't compare myself with Louis Van Gaal. He's done such outstanding things, and it's an honour to play against him. This is my first World Cup."