Rodgers: Fabregas should have been sent off

Liverpool manager Brendan Rodgers believes Chelsea's Cesc Fabregas ought to have been dismissed for his early tackle on Raheem Sterling during Sunday's 1-1 draw. 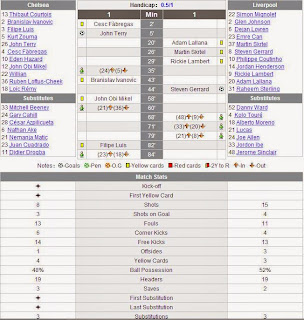 In the first minute of the Premier League meeting at Stamford Bridge, Fabregas caught Sterling on the ankle with a dangerous challenge.

The Spaniard was booked by referee Andre Marriner.

"Fabregas should have been sent off," Rodgers said. "He was out of control, diving and stretching and Raheem has done well to stay on the field and play ever so well.

"It was early in the game but that doesn't matter. It was a bad challenge and he deserved a red card for that."

Gerrard cancelled out Terry's early opener, before being given a respectful ovation from the Chelsea fans when he was substituted late on as Liverpool's slim hopes of UEFA Champions League qualification were effectively ended.

"Brilliant, that was the reason for it [taking Gerrard off]," said Rodgers of the applause for his departing captain. "You see the importance that he has for the team.

"He's taken a lot of stick here but I think the Chelsea supporters knew deep down it's only because he's a superstar player and he's been a thorn in their side for many years. It was nice for him to get that touch."

"Obviously that's been the issue for us this season, our lack of goals has really hurt us but the players have done everything," he added.

"We want to finish well but for us it's pretty clear the areas we need to improve in and if we can do that over the summer then hopefully that'll set us back on the track again."
Posted by AllScores Blog at 11:42